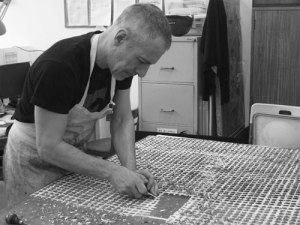 Steve writes : “I obtained a BA in Textile design at Camberwell School of Art in the early 80s. While studying I was introduced to printmaking, mainly
silkscreen and monoprint. I took up printmaking again in the late 90s at the City Lit and fell in love with etching. I joined East London Printmakers in 2003, which gave we access to a well-equipped studio. I started experimenting with lino in 2005, and this has now become my main means of expression. Living in London for 30 years has given me many opportunities for observing the city and its multi-various moods. I started making prints of the city in response to a group show entitled Love Letter to London, held at the London Assembly. I created Bridge – east, a view from Waterloo Bridge, one of my favourite places to stand, look, and feel part of something bigger. As this thematic series has grown, I have become interested in the ‘dialogue’ between the sky and the city beneath.”