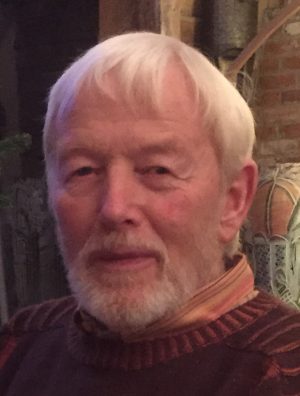 Joseph Sloan was born in Co. Down, Ireland in 1940. A self-taught artist London, Sloan was Initially drawn to theatre, its mystic and magic, its drama and tragedy. With its capacity to explore the play of life theatre seemed a wonderful means of expression. However, after nine years in the profession, its attractions started to pall. An interest in sculpture and a meeting with the Liverpool sculptor Brian Burgess led to Burgess offering Sloan space and access to materials and told him to “get on with it!” The theatre career was over and his career as an artist had begun.
In 1977, Sloan’s accomplished wood-engravings were commissioned to illustrate “Faraway World: an Orkney Boyhood”, published by André Deutsch, London and he taught this discipline at the Camden Arts Centre, London.Sloan has exhibited as a sculptor internationally and his work is held in many public and private collections. He lives between Ireland and the south of France where he is currently re-exploring printmaking, alongside his sculpture.