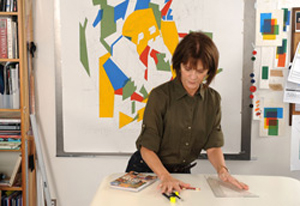 Printroom has shown Jenny Wiener since her degree show at the RCA in 2008 and represents Jenny in Europe, with solo shows at printroom in 2011 and 2014 and in 2013 in association with De Queeste in Brussels.
Jenny  lives and works in London. She studied Drawing at The University of Arts, Camberwell and completed an MA in Printmaking at the Royal College of Art in 2008. Often combining intricate technical drawing with layers of silk-screened geometric shapes, her practice revolves around numbers. The units of measurement used to qualify and to quantify, to rate and to grade. Her concern is that we are increasingly reduced to numbers: serial numbers, pin numbers, illogical scorecards, random numbers and units of measurements – measuring everything and nothing. She defines these processes and applies them to whatever she wants – from fairy tales to Renaissance paintings.By measuring fairytales and prominent historical paintings, Jenny hopes to reveal and analyze the numerical systems that we create to organize our lives.
Whether it is the analytical measurement of ‘The Old Woman Who Lived in a Shoe’ or dissecting Cezanne’s landscapes, she uncovers the illusions of numerical dependency using the rigidity of mathematics and the fluidity of wit.
Jenny is widely shown internationally and nationally and has won numerous awards, particularly in her native USA. A veteran of the RA Summer Show her work is collected widely, with collectors as diverse as Belmacz and Charels Saatchi.
A fully illustrated catalogue with a text by Monica Petzal from 2014 is available from printroom as well as a leaflet on her work.